"There's No point in being grown up if you can't be childish sometimes."

Ah, well. It's been--hard to believe it--more than 30 years since I attended my one sci-fi convention, back in my high school days.

Like family reunion, in a way. We all compared notes, discussed favorite episodes, complimented the cosplayers--a wave of Seventh Doctors (mostly female), a striking Missy, and a Third Doctor who had made himself absolutely stunning replicas of 5 of the 7 Inverness capes worn by Jon Pertwee in his run as the Third Doctor. I mean, professional quality made Inverness capes.

Not to mention the original Tenth Planet Cybermen, a quite convincing Ten, a near-perfect Inqusitor, a brace of Two, and a stylish First Doctor.

Oh, and this chap: 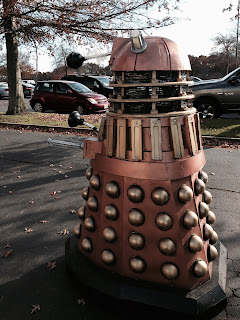 I met Charlene, the woman who made him, just as I came in. He's made the rounds and is showing it a bit, but the level of detail and the love that went into his creation is touching--especially if you saw Charlene operating the controls and making the Dalek speak as children clustered around--well, they loved the Dalekk, even the younger ones who were a bit scared, and Charlene knew just when to surprise them.

The fan-led panels were fun--my favorite was "The People v. Steven Moffat" led by the afore-mentioned missy (so say something nice!) where Moffat was "indicted" for bad writing (acquitted), sexism (convicted, with a recommendation for clemency based on the prisoner's efforts to reform in recent years), and disrespect for canon (appropriately enough, the Scottish verdict: Not Proven).

But, of course, the guests. Ian McNeice complimented my watch chain (no, I wasn't cosplaying, as McNeice guessed, I just generally wear a pocket watch), and gave me his favorite Churchillian encouragement: "KBO--means keep buggering on..."

Let me tell you, running into an elegant Janet Fielding, and hearing about her career as an agent (she was at the Oscars when Peter Capaldi won), was an experience. Brisk, friendly, a bit sly in her humor. I later attended an interview with her, and she talked about the show, her career both behind and in front of the camera, and about Project Motorhouse, her charity which aims to buy "Ramsgate’s derelict West Cliff Hall and Gardens (aka the old motor museum). . . to transform the site overlooking Ramsgate port into three state of the art cinemas, a flexible theatre, an outdoor theatre/cinema, a restaurant/bar, a café, a gallery, a function room and offices." She smiled slyly when she acknowledged using her illness several years ago to get the Doctor Who family to throw two conventions to raise funds for the project, noting that "cancer makes for good emotional blackmail" (told you she was a high-powered agent!). But she was visibly moved when she told how the cast, crew and fans rallied to the cause; "Doctor Who really came through for me then," she said. Being Janet Fielding, when a questioner from the asked her about A Fix With Sontarans, she explained the Jimmy Saville scandal, and described her horror when she found out about it. When I watched the show as it aired in the 1980s, my favorite companion of the Baker-Davison-Baker-McCoy eras was Tegan; Janet Fielding more than lives up to her "Brave heart" character.

Katy Manning, likewise, is charming, warm and deceptively ditzy on the surface. She's not, in fact, ditzy at all, as far as I can tell. She's enthusiastic, fizzes like champagne, and a marvelous storyteller of the David Niven style, regaling the audience with a shaggy dog story based on her extreme myopia and her never wearing her glasses for public appearances when she was a young actress. I can't do justice in print, but it involved her needing to fix her makeup, darting too a series of arch-framed mirrors, and getting closer and closer--only to touch noses with a diner at a fashionable hotel in which the event she was attending was held.

I went to meet Katy--if she can take a liberty, so can I--and her warmth and kindness to this superannuated fan attending his first proper convention were notable. We chatted, she teased, we talked (she passionately defending Jo Grant as a character), and we took a picture together. As she was leaving, she made sure to thank all the convention staff in the room. Not perfunctorily, but at length. She had raised the emotional temperature in the room appreciably.

I've left the Eighth Doctor, Paul McGann, and Daphne Ashbrook for last. On the two panels I saw him do, McGann was wryly funny, charming, self-deprecating, and frank. I met him very briefly at the very beginning of the convention, and he was friendly, welcoming, and kind. At the end, after his final interview, he tapped my nephew on the shoulder in a friendly manner as he walked by.

So what was it like, overall? In a way,a bit much. Excessive, surely? Grown ups in costume over an extended weekend? Passionate debates over TV trivia--do not confuse your Inquisitor with Chancellor Flavia, I advise you.

But it's a bit much in a really good way. On a weekend that was torn by violence in Paris, I spent some time among people devoted to a program whose ethos is "Never cruel or cowardly. Never give up, never give in." And that had, just the week before, devoted its climax to revealing the weakness that underlies the very thinking that fuels the monstrous acts we human beings commit in the name of the highest causes we can find:

My time was not wasted. I was, with my nephew and niece, celebrating the triumph of intellect and romance over brute force and cynicism.

Next year, Sylvester McCoy will be the guest of honor. And McGann hinted he might come back. Hmmm....